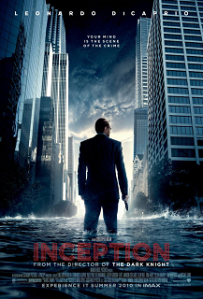 Inception, starring Leonardo DiCaprio and Ellen Page, and crafted by the best director in the business – one Christopher Nolan – is a visually stunning and thoroughly enjoyable film that has the staying power of any great mind-bending whodunit.  What makes Inception so good is how well it mixes the scifi / action genre with that more obscure class of films where nothing is as it seems (think Memento – also by Nolan, by the way, Primer or Cube).  While the latter category of films are always to be enjoyed, they all suffer from the flaw that they announce to you very early on that the entire story is merely a device to confuse you, and you can watch them over and over to find little clues you may have missed in prior viewings (which is, of course, half the fun).

On the other hand, films like The Matrix trilogy are not particularly mind-bending after the first viewing, and tend to rely more on their special effects-laden action sequences to keep audiences coming back (seriously, it’s been more than ten years and we still see clips of Keanu Reeves doing that super-slow-mo backflip/bullet dodge thing…).

Inception is superior because it is thoroughly engaging as an scifi action film – there is a fight scene in it at least as good as anything the Wachowksi brothers have done, and it holds together structurally as well.  But you also come to realize that there is much, much more at work here than just good special effects.  The judicious use of recurring phrases, images and “totems” (you’ll find out how important totems are when you watch) are all clues to what is really happening.

Without giving too much away, Inception is about entering someone else’s dreams, usually for nefarious purposes, and it isn’t the first scifi film to tackle this concept.  Remember Dreamscape with Dennis Quaid, or the miserable The Cell, a Jennifer Lopez vehicle with stunning visuals, a pretty good performance from Vincent D’Onofrio and the most foolish plot ever designed by mortal man?  But Inception is far better made and better told story.

The casting is phenomenal as well.  I’m warming to DiCaprio, who is looking less and less like a twelve-year-old these days, and I’m a big Ellen Page fan (she of Juno fame).  Michael Cain does his patented five minutes of screen time cameo without incident, and Ken Watanabe is fine (although underused somewhat).  The rest of the supporting cast adds more than the usual depth and flavor to their characters, with a special nod to Tom Hardy as Eames and the return of a much older (and rounder) Tom Berenger.