Error: Twitter did not respond. Please wait a few minutes and refresh this page.

Evie was checking her make-up in the prep mirror just off-stage.  Ellen looked on, waiting, enormously composed.  She eyed her little sister carefully and saw little signs of stress.  “Nervous?” she asked.

Evie wiped an errant patch of mascara off the edge of one eye, her mouth working strangely in some odd variety of facial body english.  “Of course not.  I’m a professional. Besides,” she said, standing up smartly, her makeup now apparently acceptable.  “If this guy is who you’re saying he is, well, then this is my Golden Ticket!”  She didn’t bother to tell her sister that it had taken two full-blown bitch sessions to convince her producer to get the half-hour of time they had bought, and that both of them ended with her in tears.  I’ll probably lose my job tonight, Evie thought.  Thanks Sis!

They walked to the edge of the stage.  The audience, each invited (and compensated) to be here, had filed into their seats and waited patiently, hands on laps, legs crossing and uncrossing, a kind of quantized human energy that never truly stopped.  Simon was front row center , with an empty seat on his right.

“What?  He saved you a seat, so what?”  Evie said, momentarily amused.

“I’ll just watch from back here, okay?”  She stepped back into shadow.

“Whatevs!” Evie said with a brightness she did not feel and walked into the lights, then up three short steps to the television stage.  There was a small table there upon which rested a c-machine, freshly printed (she had watched it happen herself), and two chairs set up for them there in the light and in front of the cameras, where Michael Profit waited to speak.

“I have Good News!” Michael said, beaming before the cameras at Evie, who had introduced him only as Michael, as her journalistic instincts judged that the last name Profit was so loaded that it was best omitted.  “Are you ready to hear it?”

He sounds like a Used-Car Salesman, Ellen thought from backstage, seeing Michael’s performance from a unique angle.

He sounds like a televangelist, Simon thought from front-row center, getting it another way.

But the audience shouted “Yes!” in unison and on-cue, as if they had been waiting all their lives for this benediction.

“This–” and Michael leaned forward and pressed his hand flat on the c-machine, “is a Cornucopia Machine, or c-machine for short,” Michael said, leaving his hand on top of the square featureless matte black box.

“The c-machine builds things.  Anythings.  Let me demonstrate,” Michael said ingratiatingly and then announced loudly and to no one in particular.  “Can I haz cheezburger pleez?”

In the audience, people moved forward in their seats.  Someone laughed out loud.  The man next to Simon was shaking his head in skeptical judgment.

Smiling, Michael extended the index finger of each hand, touched his left finger to the lower left-hand corner of the c-machine, his right index finger to the top right corner, and then drew them apart diagonally.  The audience, openly skeptical and prepared to erupt in laughter up to this point, made a strangled, shocked noise, as if something ugly and wrong, like giant cockroach, had just appeared on stage.  As Michael’s hands moved apart, the c-machine grew, scaled up, more than doubled in size, as if sliding along invisible rails, or grid lines.

Still grinning, Michael rapidly moved his hands closer together and then further apart. The c-machine adjusted its size and proportions perfectly, experiencing no latency at all, smooth as glass. And yet, it somehow hurt a little to look directly at it, like staring at a very bright light, or something too complex for they eye to grasp fully.  It’s like those optical illusions that make you uncomfortable for no reason, Simon observed.

Now Michael touched a knuckle to the bottom center of the c-machine and drew his hand straight up, and the front of box slid silently upward, revealing a slightly reddish-brown interior and some odorless steam that quickly evaporated to reveal …a very large cheeseburger.

“Yum,” said Michael, withdrawing the burger, and – with a decent sense of the dramatic – took a healthy bite out of it, and around a mouthful of just-printed beef, said:  “Food. Medicine.  Clothing.   Gold, silver, diamonds, interesting polymers, in fact materials of almost any type.  Well, almost.  No plagues and no nukes, you silly kids!”  He gestured with the burger still in his hands. “No weapons of mass destruction.”  He waved the burger at the camera.  “He took safeguards to mitigate that risk.”

There was a pause, and Evie jumped into it.  “I’ve heard that these machines are popping up down South, but this is the first time I’ve actually seen – wait.  You said he.  He who? You didn’t invent this?” Evie asked.

“Me?  No, of course not.  And it’s Divine Creator, not inventor,” Michael said sweetly.

“Are you saying that the maker of this device is-”  Evie said, her voice a little higher-pitched than normal.  She was pale under her makeup.  In her ear, she heard the producer groan and then mutter, Guy’s a religious nut!

“Let’s call him the Eschaton,” Michael said, placing the remainder of the burger on top of the c-machine, where it sat oozing ketchup.

“Okay, well…” Evie said, nonplussed, and then, recovering a bit.  “So why did this…this Eschaton make this device?”

“It was the necessary conditional domain topology for the desired causal outcome in this light cone,” Michael said seriously.  Evie’s mouth fell open.  You could have heard a pin drop in the studio.  In her ear, the producer:  What the fuck is he talking about?  Do you know what he’s talking about?  ‘Cause I sure don’t!

“Yes, I know.  It’s difficult to understand.  That’s all right.  Let me try explaining in a different way, one that everyone will be a little more comfortable with.  Let’s call Him a god, a deity, although He would be quick to qualify that as a minor deity,” Michael said.  “And be done with it.”

Michael blazed ahead.  “Needs to be immortal, right?  Check. Although true immortality appears to be impossible, but the Eschaton will exist for as long as He wants.  So, call it immortality with a self-termination clause.  Virgin birth?  No amount of sexual reproduction produced the Eschaton, so check!”  Michael bounced a little in his chair, like a happy child getting ice cream.

Evie was completely lost now.  Somewhere in the booth, she thought she could hear embarrassed, muffled laughter.

“The ability to manipulate matter,” and Michael gestured at the cheeseburger-laden c-machine as proof.  “To harness and channel huge gobs of energy.  Warping space-time. Tickling gravity. To be wherever whenever He wants.  Check. Check. Check. And check!”

“So, this Eschaton…he’s the Creator of the Universe?” Evie said, looking for a foothold of any kind, feeling her control the evening flapping away from her.  She could definitely hear the laughter in the control booth now, tinny and awful in her ear.

This is the end of my career, she thought.

Michael sighed.  “No.  He knew people would ask that question, though, so He told me what to say:  The universe is not my fault.  Truth be told, the Eschaton doesn’t know why there even is a universe – or why there is anything at all – instead of nothing. Not definitively. Not yet.  But researching that question is a primary interest of His.” Michael smiled, then his smile faltered for a moment.  All at once, he seemed to somehow diminish in his chair.

From his seat, Simon could see that Michael had gone pale.

“The c-machine can produce whatever you need to lead a happy and full life,” Michael said, his voice losing both force and volume as he spoke, addressing the audience and the camera, pointing at the c-machine.  “This is the Eschaton’s divine gift to you:  You no longer have to worry about having enough to eat, or warm clothes to wear, or medicine for when you are sick.”

Michael shook his head dog-like at the camera.  To Simon, he looked somehow suddenly drunk. “And all of that and everything that goes along with it is not the Point.  You haven’t heard about the Point – capital P – yet.  Until now.”

And Michael put his now visibly-shaking hand on top of the c-machine and said, in that strangely thin, tired voice:  “The Elixir.”

He removed his hand and slumped back in his chair.

“Go ahead,” he said to Evie, sweat sparkling on his forehead.  “Take it out. It won’t bite.”

More aware of being on camera than she had ever been in her life, Evie reached into the gaping maw of the c-machine and withdraw a small, beautiful silver chalice.

On cue, the audience began to clap and chant “Drink it!  Drink it!”  And though they performed as they had been paid to, their faces could not erase their obvious revulsion and fear.  The cameras never shot the audience.  Their voices were all they needed.

Evie heard in her ear:  Goddamn it, Evie!  DO NOT drink that shit!  Don’t–

In a kind of dream, she removed her earpiece and with the other hand raised up the chalice, so everyone could see it.  She held it at eye-level and saw Ellen off-stage in the background, shaded shadow-sister, arms folded, watching her.  Evie made a quizzical face, just for an instant, a face only her sister would know or see, a small signal of the sibling code only they had:

Is this really okay to drink?

And her big sister had nodded firmly once.  Yes.

A flash of images hit Evie then, a memory of sixteen-year-old Ellen telling eight-year-old Evie to go ahead and take the cough syrup even though it was icky.  It would make her feel better.

And she drank.  It tasted like nothing.  The audience seemed to sigh and she smiled at them to show she was okay.  There was muted applause.

“Congratulations,” Michael said, then, rising unsteadily from his seat, he announced to the audience, his voice now raised to a notch just below a bellow: “The Eschaton has a message for you.  It’s…it’s coming now.”  The flat palm of a hand against one temple.  “But He wants me to emphasize to you all that you should take the Elixir.  Above and before all things, take the Elixir.”

And every cell phone in the studio chimed and/or buzzed in unison, including Evie’s, secreted inside her jacket.  She looked down at it in shock, started to reach for it and saw others in the audience – hell, nearly everyone in the audience – executing the same gesture.

“Go ahead.  Take a look,” Michael said,  shuffling slowly off-stage toward Ellen, who watched him seriously, having completely ignored her own phone’s chime.  “It’s for you.  All of you.” 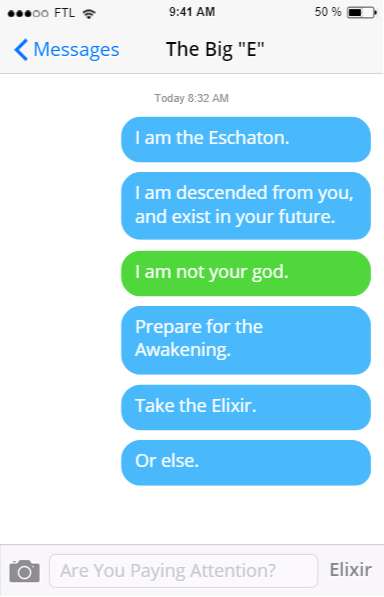